Next on our tour of Bamako we drove through some of the crazy market areas surrounding the Artisan’s Market. The streets were busy and crowded with vendors of every kind.  Motorcycles surround your car as you drive here and people flock on either side of every road with their wares for sale.  It’s hard to take it all in.

We drove to the Artisan’s Market, then parked and went in.  It was relatively peaceful there.  We spent about an hour in the market and outside the market enjoying the sights.  Many of our friends greeted us and Moussa became our tour guide. We told them we weren’t there to buy, but to look and show our visitors.

It was fun and interesting and again, a visual overload. The sights and smells and sounds are amazing. You can hear the metal workers and jewelers pounding silver on anvils. The wood workers are chiseling blocks of wood into animals and masks and figures. The leather workers are stretching skins and scraping them. We saw skins soaking in buckets to soften them for working into belts and wallets and shoes. We looked at the mud cloth and every kind of art. We walked through narrow alleys of spices and dried goods. I always think of the old city of Jerusalem in those parts–it looks and feels and smells the same. 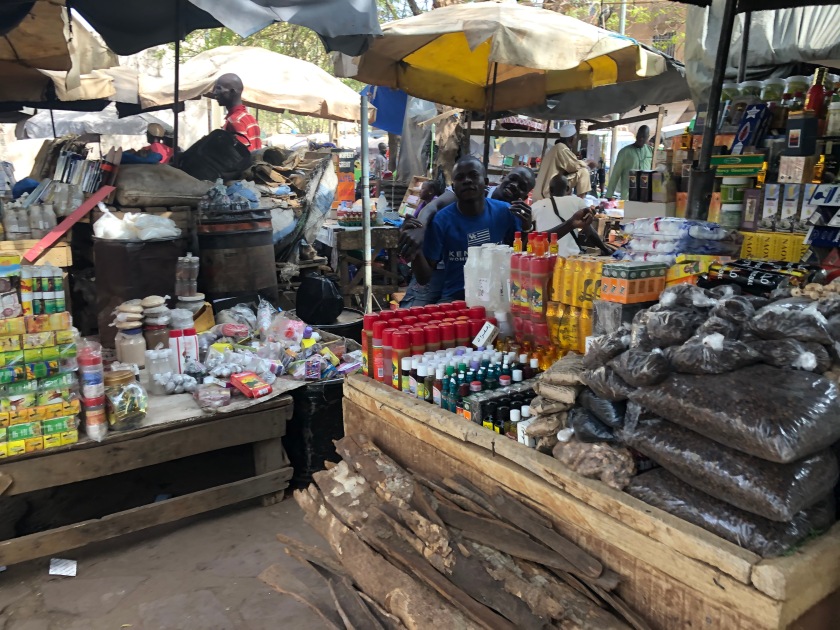 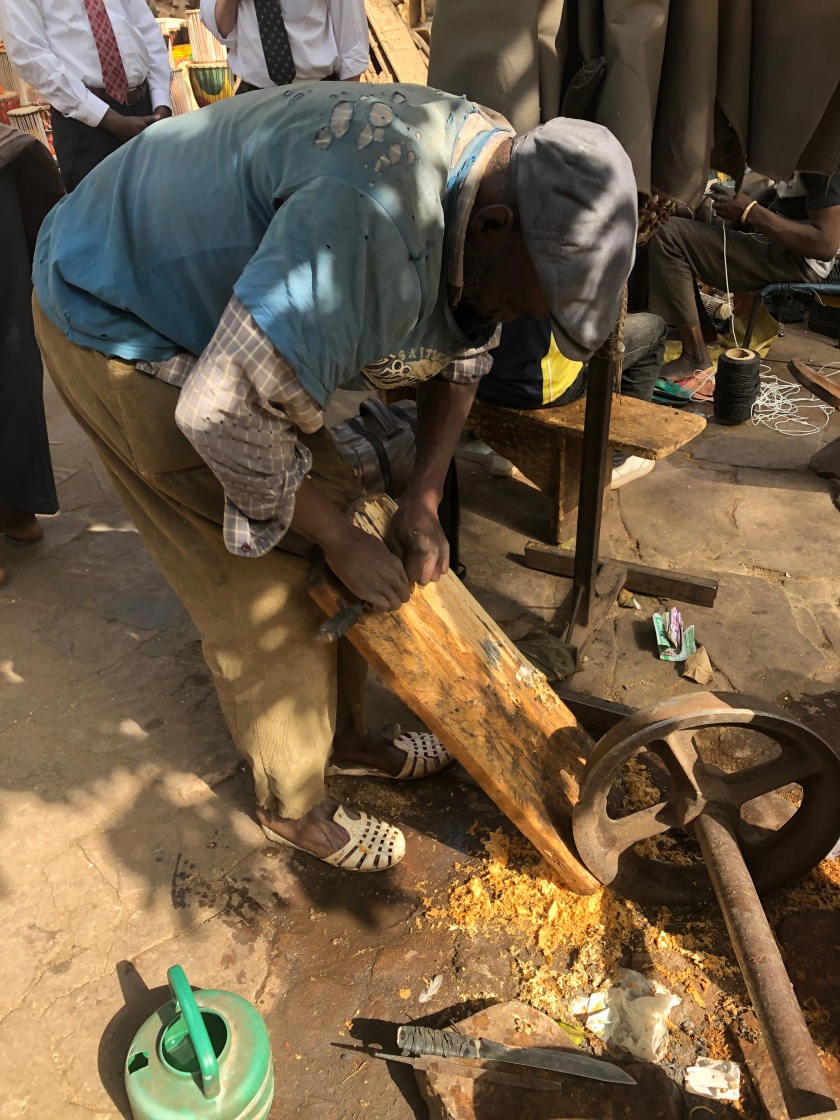 We went out of the walled part of the Artisan’s Market into the streets and wandered through the crowds to the fabric areas and mazes of people and shops.

Then Moussa took us to the entrance of the Mosque, which was closed for cleaning during the time we were there. I’d never been around that back side of the market before. We saw women selling pottery, making brooms and selling spices and dried goods there too, along with pots, pans and kitchen wares. 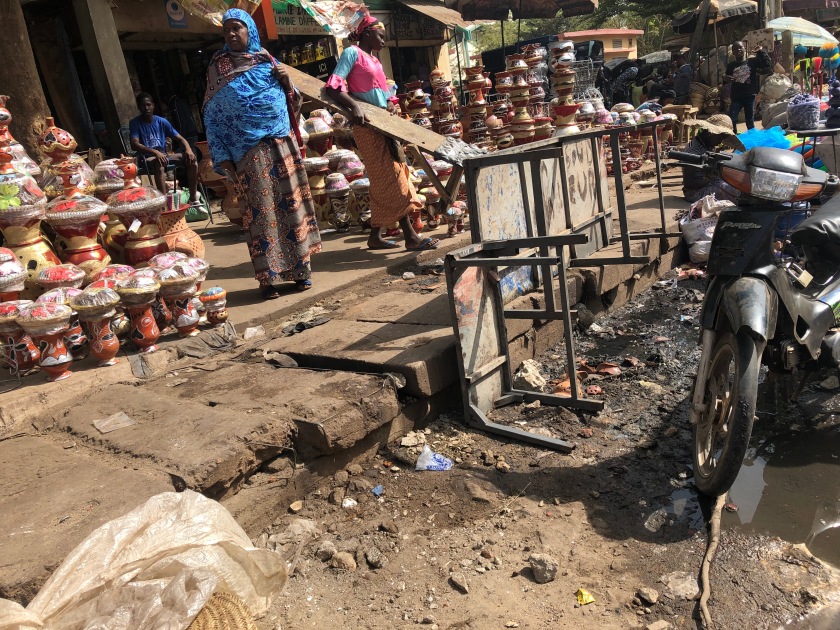 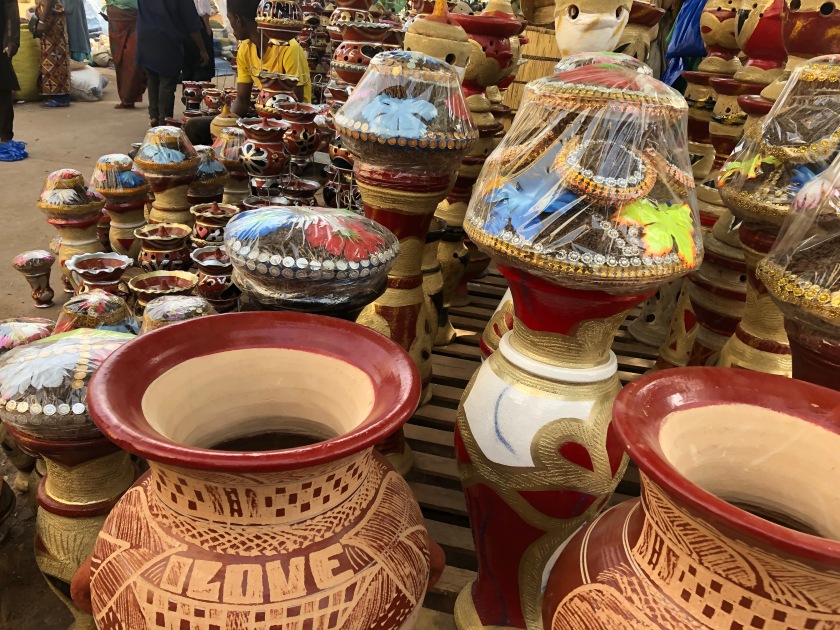 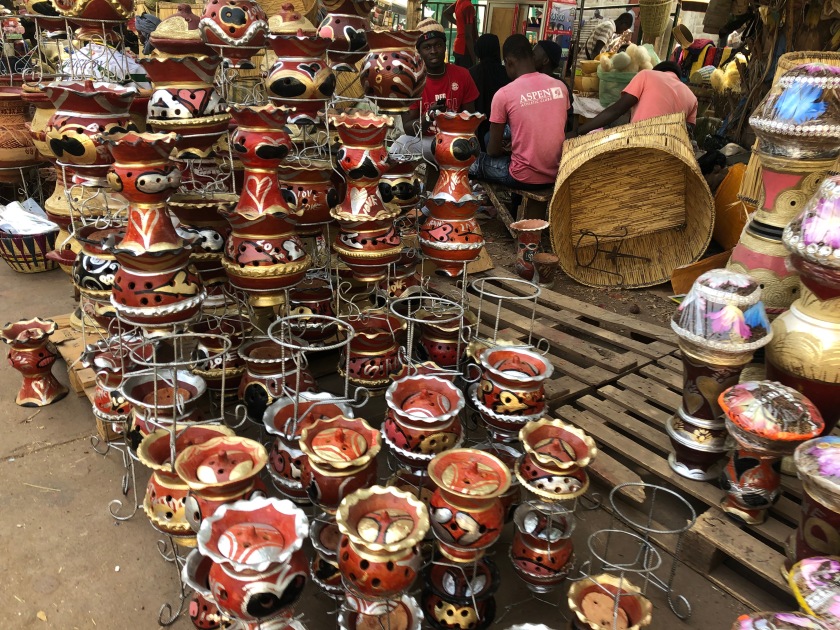 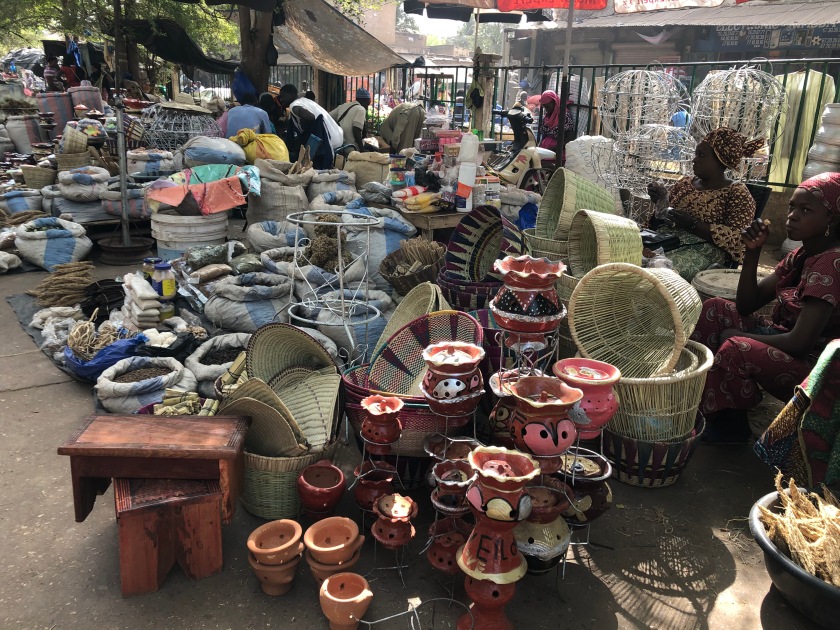 I wish I knew what all of these things were used for. 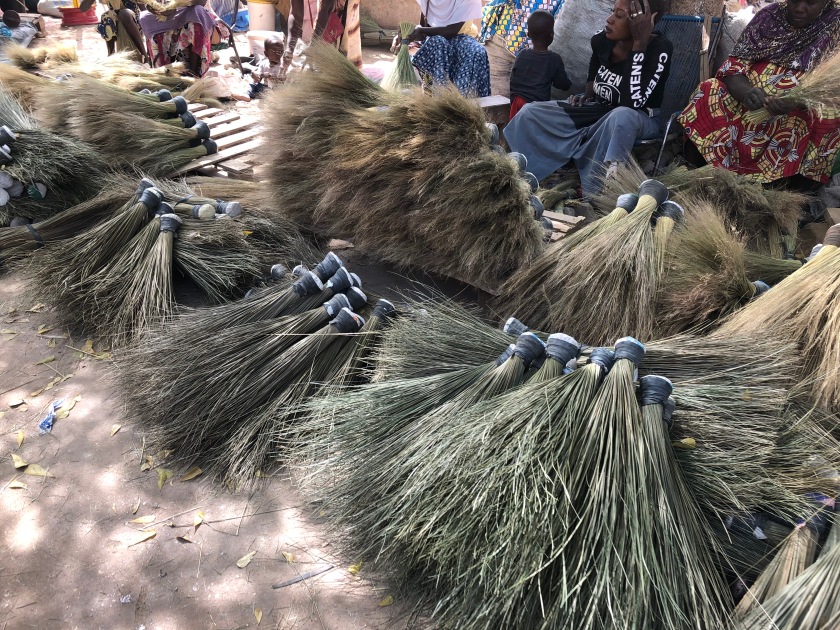 Stools and gourd spoons and bowls: 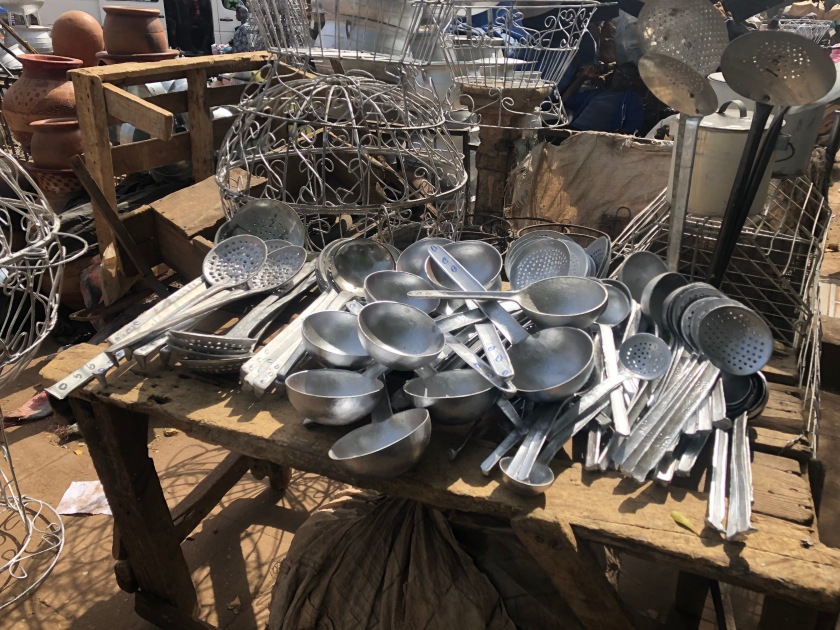 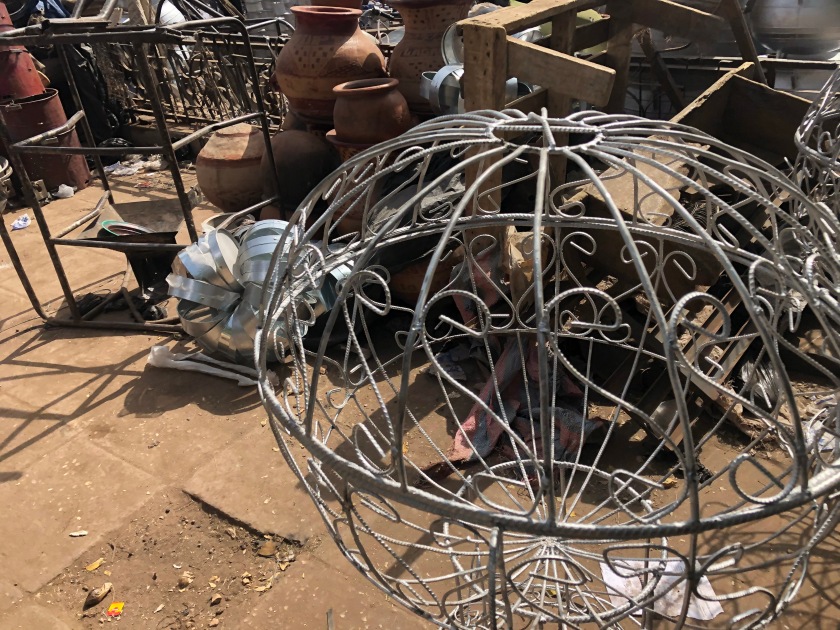 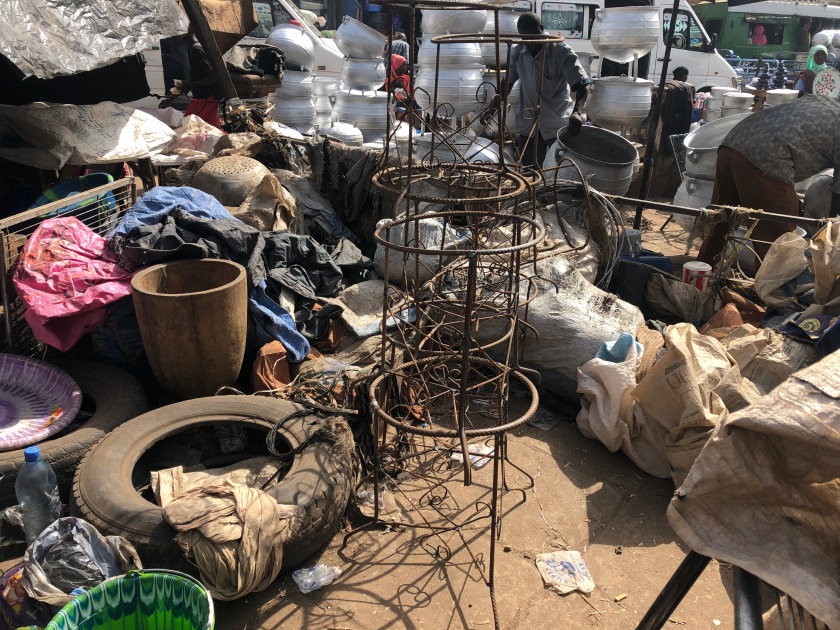 This pot was as big as the motorcycle next to it–big enough to hold an entire goat! 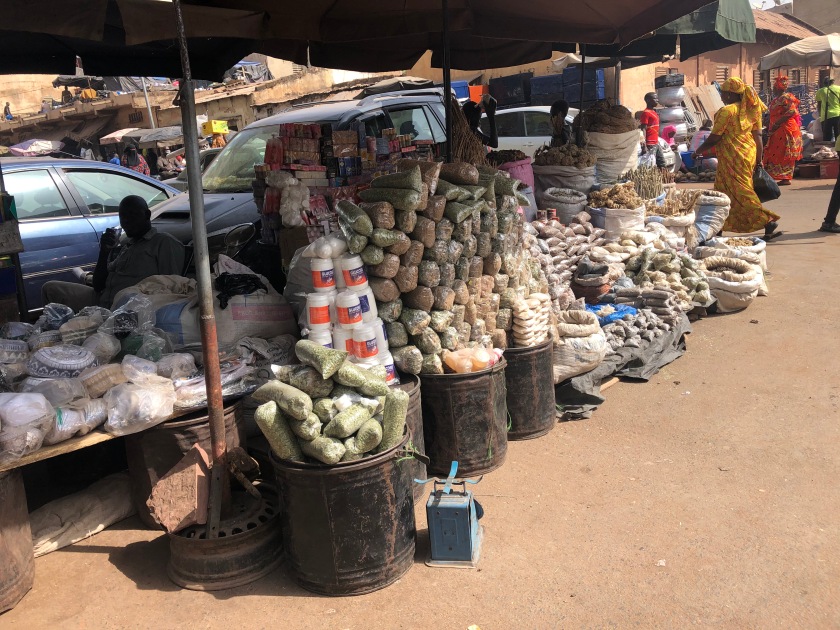 There were also lots of Muslim items for sale on the back side of the mosque–Arabic books and the Koran and the caps the men wear and the prayer beads. One thing after the next, crammed into tight spaces, all on the ground or on low tables. It’s amazing how much stuff is for sale everywhere you look.

By the mosque we saw a whole row of men on the ground on mats kneeling in front of other men who had old fashioned straight-edged razors.  (Sorry these pictures aren’t very good.)  They were getting their heads washed (soaped) and then shaved. The barbers had a small silver bowl of soapy water they’d dip into, then they’d massage the heads and shave them. 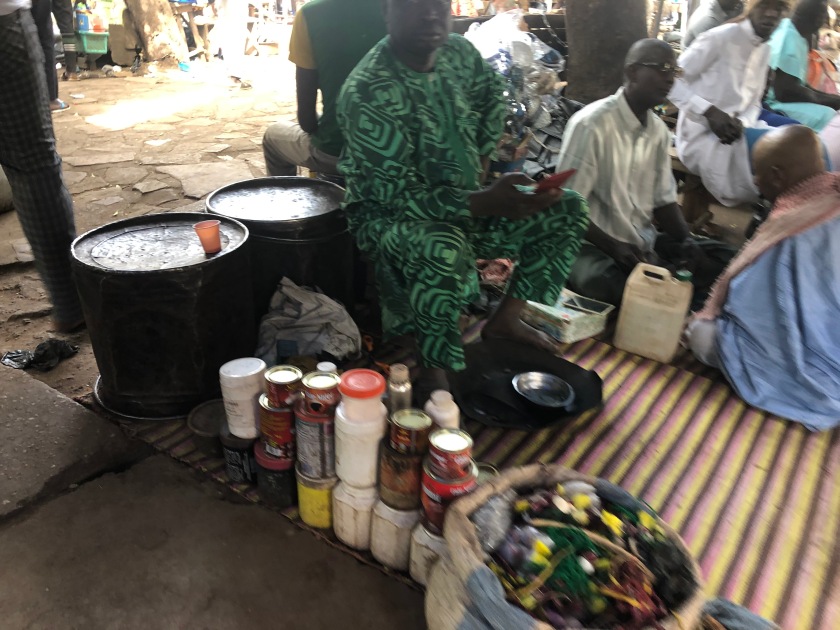 Our friend, Moussa outside the market, in the parking lot where there are so many beggars hoping for a handout: 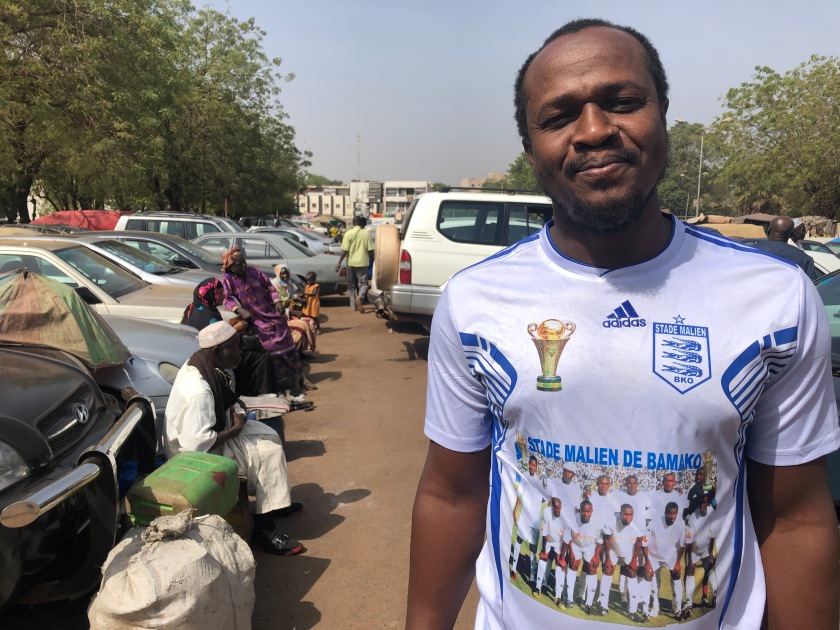 This lady in the parking lot set up her shop in an abandoned van:

On the way out, we drove past the ju-ju or white/black magic vendors with their interesting wares–baboon heads, dried parrots, bones, horse heads, body parts, etc.  These are used to make potions to solve every conceivable problem.

The markets here are fascinating.  Everywhere you look, you see things you’ve probably never seen before.  What an amazing place!