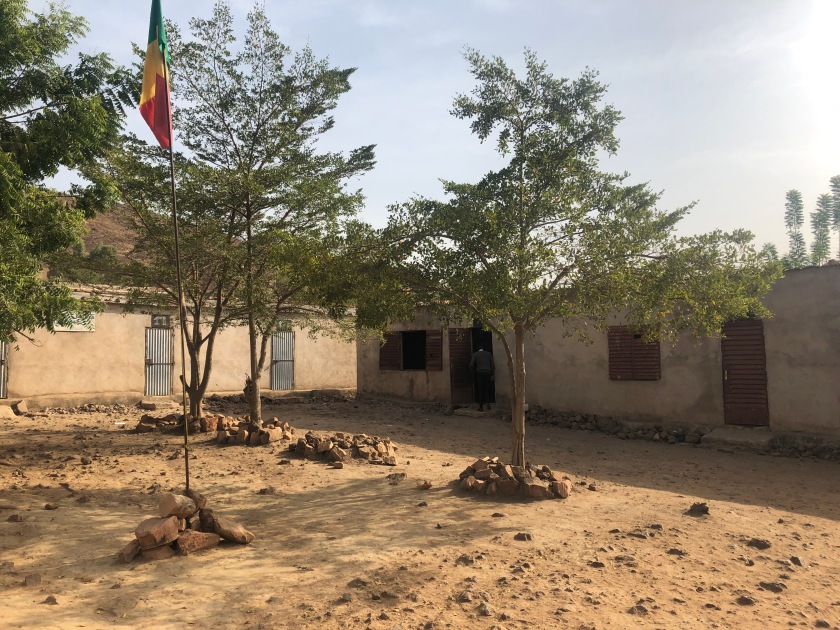 While Pres Sekou and Elder Lewis met with the members and friends here in N’Gomi this afternoon, I waited with these three beautiful young women in the school courtyard.  We spent the first hour getting acquainted.  Michou (16), Amissetou (17) and Ame (17) helped me practice my French by asking me lots and lots of questions.  And I learned a lot about them.

Michou wants to study biology and medicine when she goes to the university.  Amissetou also wants to study medicine.  Ame want to be an airline pilot.  The two older girls are cousins.  They’re in their last year at a private high school, preparing for their final big exams in a few months.  They study hard.

The private school these girls attend is about a 1 hour walk from their compound.  It’s expensive to go there–about $400/year.  They all work to help pay for the school fees.  They said they don’t mind wearing school uniforms. 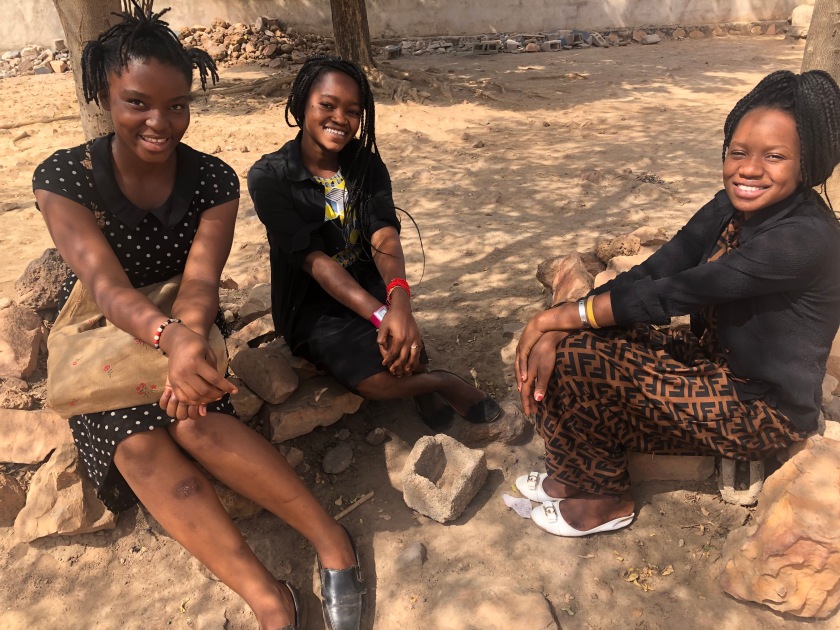 I asked them about their beautiful hair and hair extensions.  They do each other’s hair every 2-3 weeks.  Extenions are usually added for a fete, or celebration of some sort, otherwise they wear more traditional braids or plaits.

That’s when the clip came out of my hair and they all jumped up to plait mine!  That was fun for them and for me too! 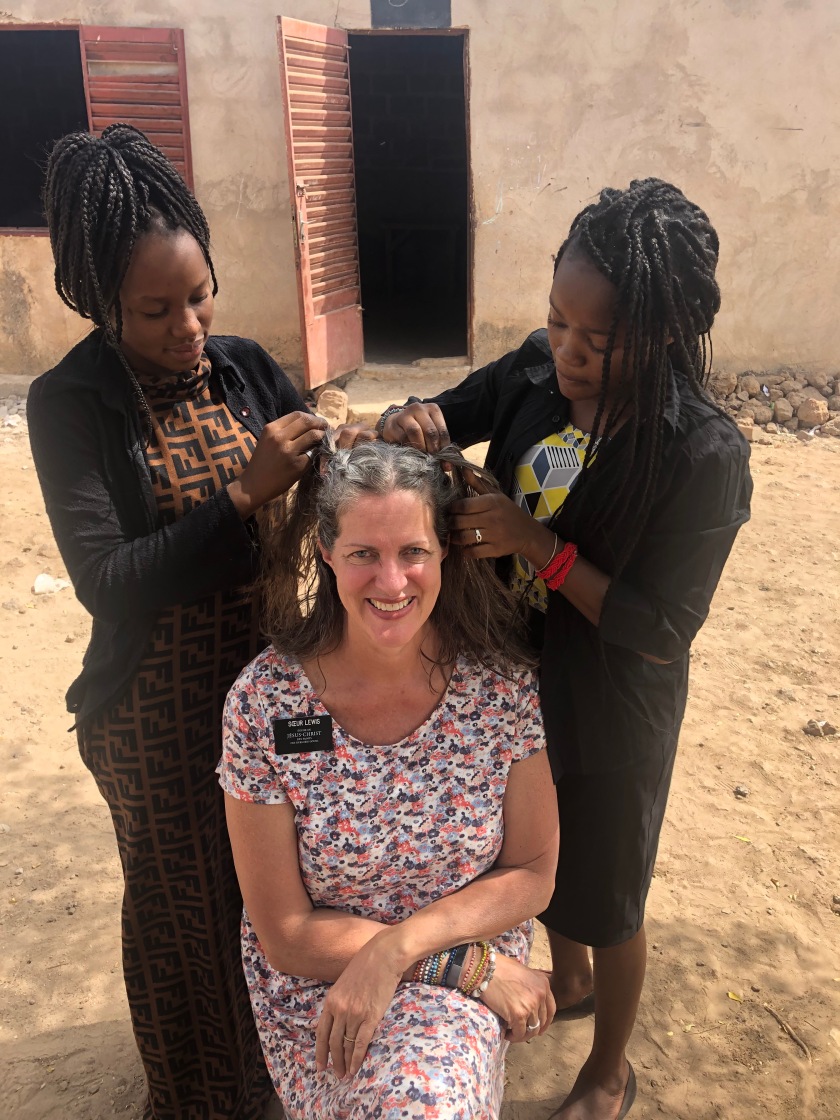 For the rest of the afternoon I was a proper traditional African woman!

After siting for such a long time, we decided to go take a walk.  Across the street and down the hill is the large mango grove where we had the celebration in November.  We walked down to this shady cool grove and the temperature dropped about 10 degrees.  It was cool and shady and we watched 2 young boys with their sisters trying to find green mangoes in the huge trees.  They had a long bamboo pole with a wire loop on the end.  When they spotted a mango, they’d pull it down, and the sisters would catch it in a cloth held between them. 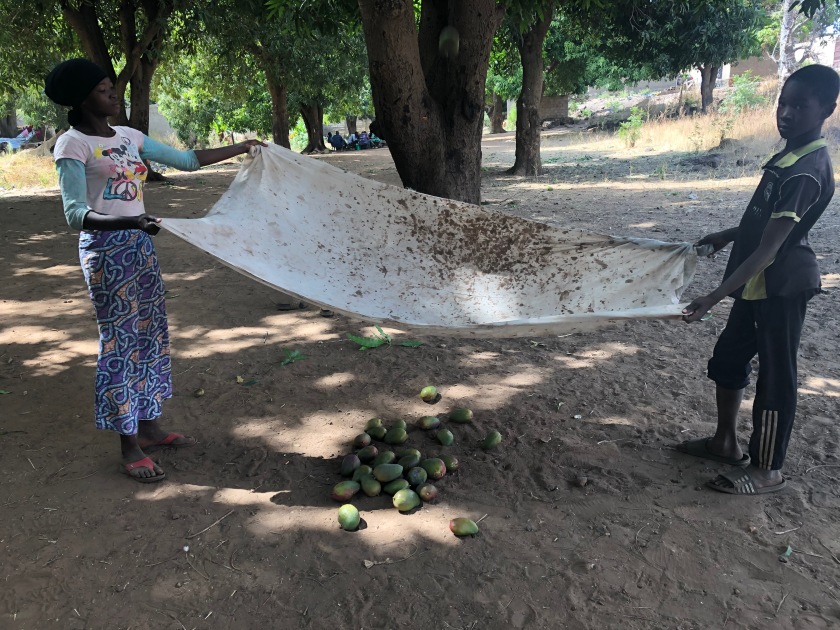 They’d found about a dozen green mangoes and were searching for more.  I asked what they did with the green ones.  They told me they soak them overnight in something (?) that helps take the acid (?) out of them.  Then they put them in a big bucket with a lid on it for a few days.  Then they peel and chop the mangoes into small pieces and cook them with some seasonings and peppers and they sell this to the school children when they come home at lunch time.

Then the girls spotted a very high limb on a very high tree that had dozens of mangoes on it very high up in the top of the tree.  Before I knew it, the two younger boys, probably 10 and 12 years old, scampered up the tree like little monkeys!  I called them back and took a picture before they scurried right back up, higher and higher.  I was glad their mother couldn’t see them 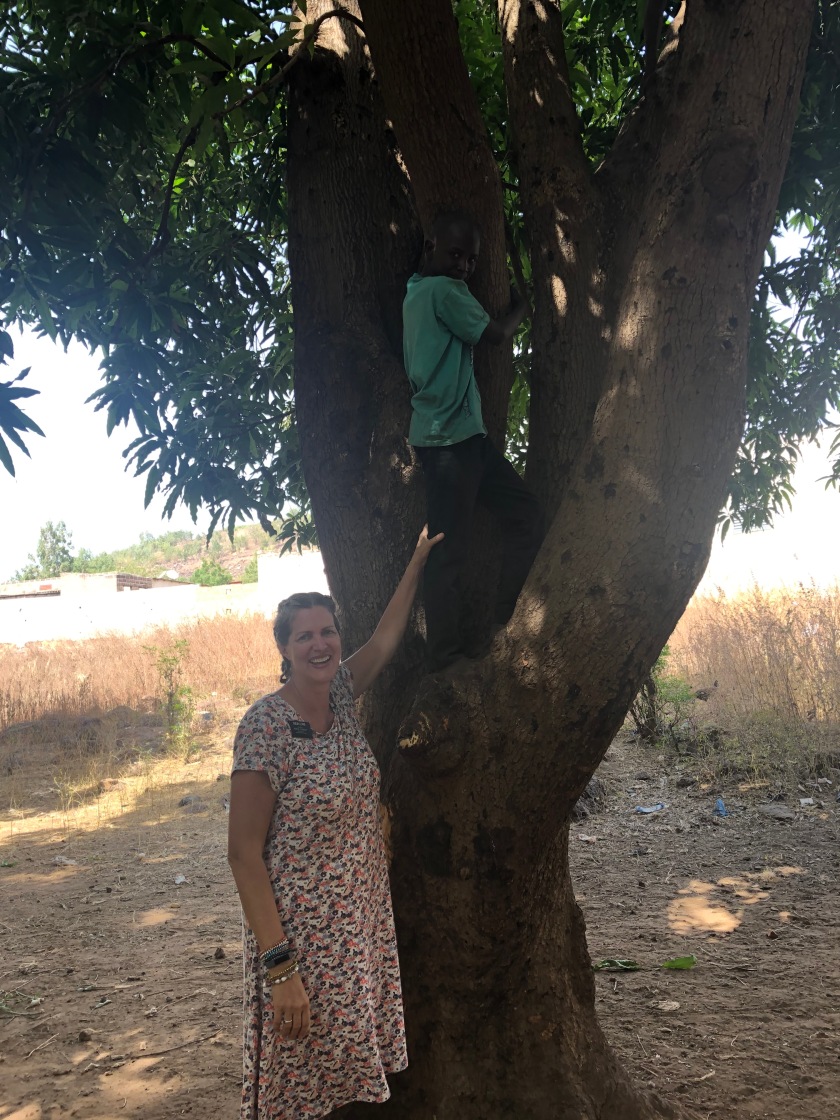 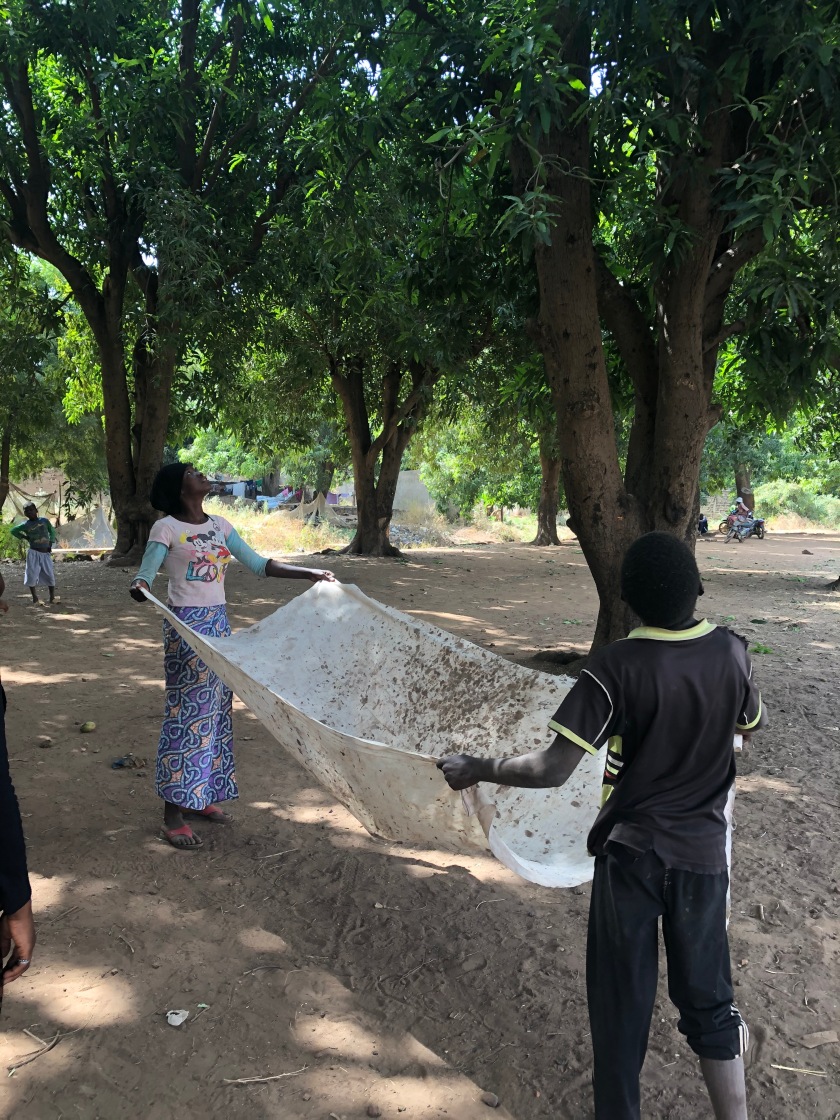 The smaller of the two boys went the highest.  He weighed less and the branch thinned at the top.  He had the pole and would grab the branches the mangoes were on and pull them close enough to pick the fruit.  Then he’d toss the fruit down 10-15 feet to his brother, who then tossed them down to the girls on the ground.  Team work!

By the time they’d picked every last mango in sight, there were more than 50 just from that one limb!  These boys were amazing! 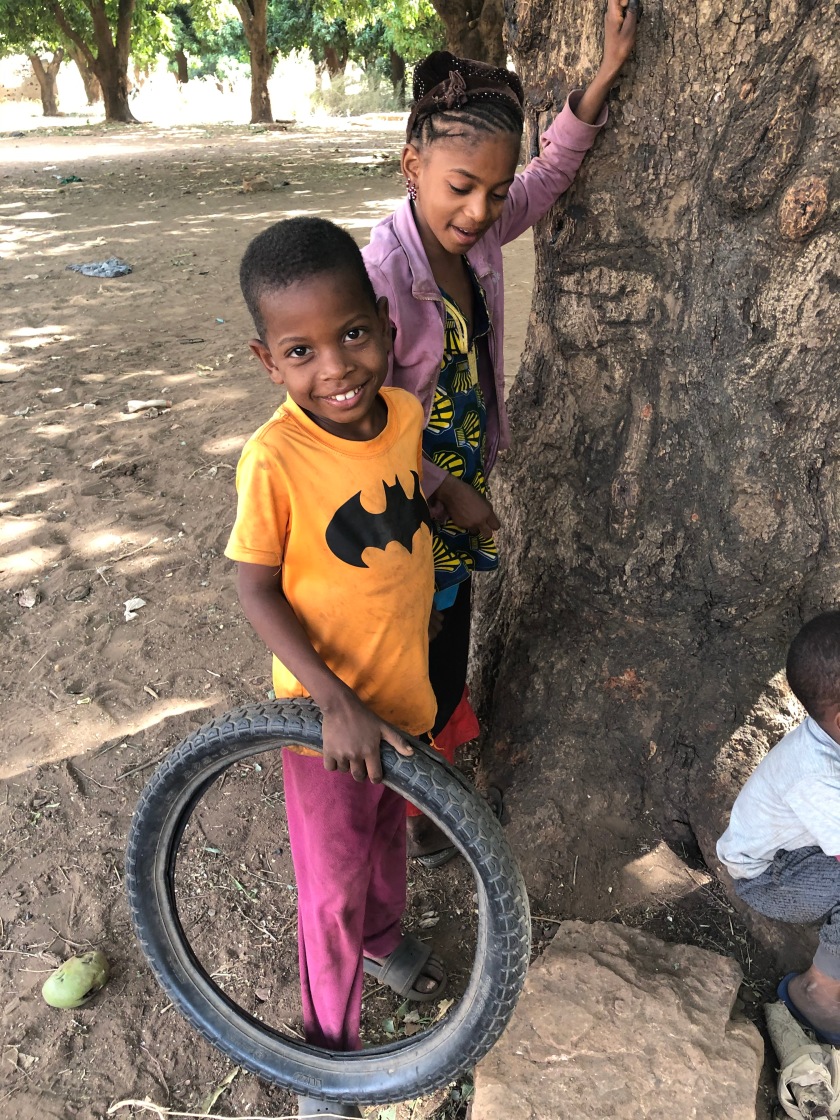 These kids were pretty happy with their findings–I’m sure their mom will be thrilled.  Then we walked back to the school to see how things were going.  Looked like we’d have another hour or more to wait, so we went out into the road to find some kids to play with.  They came.  They came with their little toys and sticks and rocks and wheels. 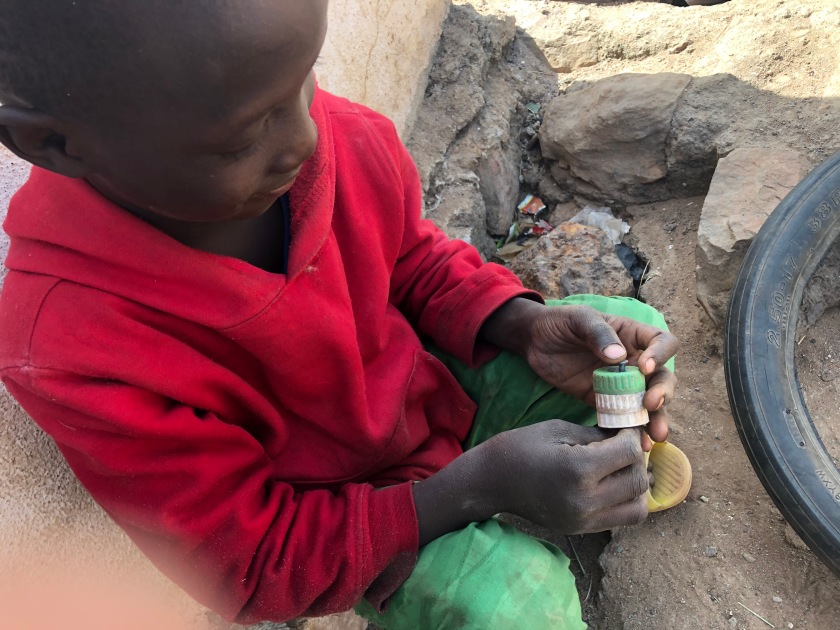 All you really need in life to be happy is a stick, a nail, some inner tube rubber bands, and a couple of bottle lids.

These kids make all their own toys. They play with rocks and clods and sticks and old bike tires. They spit in the dirt to make mud. They fill old pods or used bottles with rocks and shake them. They always have their hands in the dirt doing something. They make do. It’s fascinating to watch them, never bored.  When I was a kid my Dad built us a sand box to play in.  These kids live in a sand box and they are happy.

Finally the men came out and I thought we were finished. Then Chiaka came by–he wasn’t at church, so they went to interview him. That took another hour. We were really getting hungry. It was about 3:00 when they finally finished. Then we finally got in the car and waved goodbye to all our street friends and we drove to Rose’s compound, about 20-30 min away for our next adventures.

One thought on “Sunday Afternoon in N’Gomi”